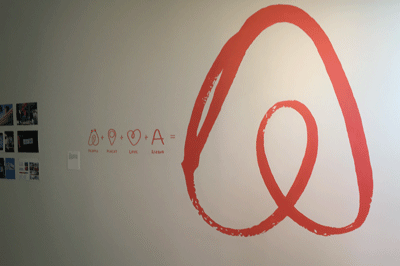 I had an opportunity to visit Airbnb today and was super impressed with the effort put into the design of their office space and into creating a cohesive company culture. We were led around by their product design team and got a chance to view the spaces and gained some interesting insights.

There were a lot of deliberate planning that went into the design of the whole space. There was a lot of thought put into each aspect, from aesthetics to company culture and company welfare. Too many details and features that I wasn’t able to absorb everything. Comparing my visit to Zappos just last week, I did enjoy today’s tour more – but not to say Zappo’s isn’t fantastic either. But I guess it’s because they are two very different companies at a different stage.

Upon arriving, we were warmly greeted by the team, and entered this gallery/lobby where the space was dedicated to documenting the rebranding journey of Airbnb. They drew their inspiration from people, places, quotes, anything you could think of that relates to people and spaces. There was no excuse for not having enough space to put up all those creative bubbles of ideas and concepts.

Re-branding conceptualization.. all documented and put up for all to see. Which produced the above now all-ubiquitous Airbnb logo.

Simple, meaningful designs decorated all around the office for clean inspiration.

They have up these personas of hosts and guests to kind of remind them who they are creating the product for. It was cool to think that they must’ve put alot of user research and work into creating just these seemingly simple 6 personas which helps them to effectively prioritize product features that could serve each persona.

What I found pretty interesting was their concept of storyboarding – which they’ve named Snow White, apparently the founder drew inspiration from Walt Disney’s biography. Snow White by Disney was the first full-length feature animated film that was created under Walt Disney; before Snow White, animations such as Mickey Mouse, were merely short animations. For the first time, when a huge group of animators got together to work on Snow White, things could’ve gotten pretty messy if everyone had no clear visualisation of how the concept and process were supposed to look like. Hence, they collated Snow White scenes into a storyboard, which made it simple for the team to connect the dots. Say for example, you’re working on Scene 3 – you’ll get a visual and broad sense of what’s happening in Scene 2 and 4.

Questions you should be asking yourself when going through the Airbnb experience.

I suppose this is especially important when designing user flows for products – Sometimes we might get too caught up with the details of a complicated flow that we lose the big picture, or become too focused on a particular feature that we forget what’s happening before and after, which might result in creating features that do not connect at all.

By the way, those frames are detachable too – so you can easily bring them along with you to meetings or for short team discussions to help you explain yourself better. What deliberate thought they’ve put into designing this physical storyboard.

Meeting rooms were modelled after a certain listing that was found on Airbnb itself – thus these spaces are actually designed after real apartments put up on rent on Airbnb. It was a fun way to put yourself in the guest’s shoes I suppose – when you sit inside all day and draw inspiration from your surroundings.

One minute detail of these rooms are actually these signs too – if you’ve noticed the black metal rails, they are actually different swirls for each signboards, again adding to the effort of imitating the ‘authentic’ feel of each of the countries.

They’ve got this super cool hip space that has kind of a night club feel – which was pretty funny within a company itself. It was apparently built by the engineers, for the engineers themselves.

Also, a very classic-ish library which I thought was kind of similar to what Kickstarter had.

Hey and, Airbnb has their own food department too! They have their in-house chefs and they’re very much into healthy lifestyle and foods. Thus the lunch that we had was super healthy – no sodas were provided and there’s a juicer for you to juice some fresh fruits too. They have compost and recycling bins around too, very much emphasizing on the importance of staying natural and green.

It was fun to see their departments being represented by certain kinds of animals too – like the Design team is represented by a penguin, the Food department by a bear, CX team by a giraffe and so on.

They have a Giraffe Stand here, where you can write personal appreciative messages to team members who’ve helped you along the way and you’d like to give them a little thank you surprise. This is such a good idea to bond the company and loyalty, especially when you’re surrounded by supportive and appreciative teammates.

Oh, I remembered that Zappos actually has a similar practice too – every once or so all of them would be given a $50 credit (I can’t remember if it’s in cash or vouchers) and they can gift it to a fellow teammate whom they’re grateful for. It’s these little details that companies pay attention to that makes people want to go to work every day.

Before they got funded by YC, they were struggling with financial difficulties. Nobody believe that it was feasible to rent your home to strangers. To pull themselves out of debt, they sought to fund themselves by manufacturing themed cereals during the 2008 Presidential Campaign, and managed to almost fully get off their debt. Then they got approached by YC, with Paul Graham saying: “If you can convince people to pay $40 for a box of cereal, you can probably convince them to pay to sleep on each other’s air mattresses. You guys are in.”

I guess that’s why the founders are also known as ‘cereal’ entrepreneurs. (Geddit? :p)

Fun fact: Obama cereal sold better than McCain, so much better that they had to give out a free box of McCain with every Obama purchased.

A bunch of their job advertisements plastered on their lift lobby walls.

All in all, a very inspiring office space and culture.